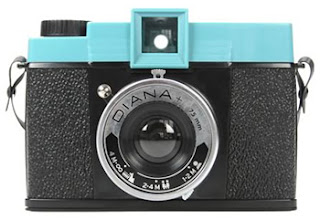 As someone who enjoys using the Holga, an all-plastic medium-format camera made in China that provides some interesting 'low-tech' results, I was intrigued to discover that the Lomographic Society has revived the Diana, an all-plastic medium-format camera that had its heyday in the 1960s and ‘70s, and inspired the Holga while achieving legendary status among many creative photographers for the atmospheric images it captured. The new Diana Plus is a faithful recreation of the original, with the addition of just a few features. Its boxy black and light-blue body backs up a plastic, single-element 75mm lens and a non-TTL optical viewfinder.

The Diana Plus retains the simplicity of its forebear, with a choice of Normal and Bulb shutter settings, three selectable apertures, and manual focus control. New to the twenty-first-century Diana are a shutter lock for long exposures, a standard tripod mount, and a panorama mode for shooting a seamless series of images the length of a roll of 120 film. Another alteration is the ability to remove the lens, which allows photographers to use the Diana Plus as a pinhole camera at its smallest aperture setting.

To capture separate frames, the Diana Plus can be set to shoot 16 4.2x4.2-centimeter images or 12 5.2x5.2-centimeter photos on a roll of 120 film. The camera’s manual film advance also makes multiple and overlapping exposures possible.

The Diana Plus is available now for $50 and comes with a 200-page book of Diana photographs and history. The Lomographic Society also sells $75 Diana Plus kits that each include 20 rolls of Agfa Portrait 160 or Optima 100 film.
Posted by TW Oliver at 6:44 AM