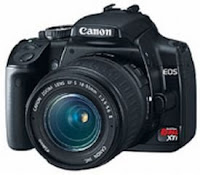 Canon recently released updated firmware for its consumer digital SLR, the EOS Digital Rebel XTi. Version 1.1.1 includes data for three new lenses and adds Polish to its list of supported languages. The Canon Digital Rebel XTi now has detailed information from three Canon lenses: EF-S 18-55mm f/3.5-5.6 IS, EF-S 55-250mm f/4-5.6 IS, and EF 14mm f/2.8L II USM. “The Version 1.1.1 firmware being released this time is for cameras with firmware up to Version 1.1.0. If the camera's firmware is already Version 1.1.1, it is not necessary to update the firmware,” according to the Canon firmware website.Users are reminded to use a fully charged camera battery and refrain from shutting down during firmware uploading.

Firmware 1.1.1 can be downloaded through Canon's website.
Posted by TW Oliver at 8:52 AM