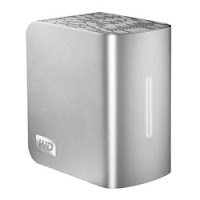 Western Digital recently debuted new 4-terabyte (TB) capacity My Book storage systems. Designed to work seamlessly with Macintosh computers in addition to Windows, the new RAID 0 drives are compatible with Apple’s Time Machine automatic backup. They include eSATA and FireWire 800 compatibility for maximum performance as well as FireWire 400 and USB 2.0 for maximum flexibility. They also feature WD’s GreenPower Technology for power savings and cool, quiet operation. With a MSRP of $649.99, the new drives also can be formatted for Microsoft Windows Vista and Windows 7 systems, but not Windows XP, which has a 2TB storage limit.

Western Digital External Hard Drives
Posted by TW Oliver at 7:09 AM No comments: Links to this post

Sony has also announced a new full-frame lens to coincide with the release of the new Alpha 850 full-frame sensor DSLR. Expected to begin shipping in November 2009, the 28-75mm f2.8 SAM lens provides a constant f2.8 at an affordable price. Expected to retail for around $800; far less than the available Sony Zeiss 24-70mm F2.8 ZA. The lens features 14 elements in 16 groups including four(4) aspherical elements and SAM (Smooth Autofocus Motor) within the lens.
The SAL30M28, a 30mm f2.8 Macro DT lens for the APS-C format is also due to be released around the same time
Posted by TW Oliver at 10:42 AM No comments: Links to this post

Digital Photography Review has just posted a hands-on preview of the new Sony Alpha 550 by Richard Butler. Take a first look at the new 500 series DSLR from Sony.
Posted by TW Oliver at 10:34 AM No comments: Links to this post

Just when I was about to jump ship Sony has announced the upcoming release of three new cameras. The new Sony Alpha 850 is their next generation full-frame DLSR following the popular A900. At only around $2,000 you get the same 24.6-megapixel CMOS sensor that graces the A900, and most of the same features. 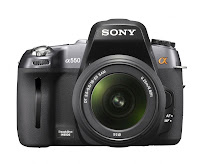 For those of us on a budget, the new Sony Alpha 500 and 550 sound like good choices if you haven’t already decided on the older Alpha 700. At 12.3-megapixels for the A500 and 14.2-megapixels for the A550 featuring a brand new Exmore CMOS sensor these models will provide quality for less than $1000. Each includes built-in SteadyShot stabilization, a 3-inch tilt-angle LCD, BIONZ image processing engine, ISO settings up to 12800, and an auto HDR mode to combine two frames. Other features include LiveView, and an ISO button for quick selection. Many online retailers are already offering pre-orders for these models that are due out within the next month or so. 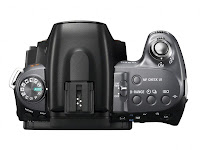 Being a long-time Minolta shooter, and more recently Sony, I have been contemplating starting over and replacing my gear with Nikon. Obviously expense is the largest concern, but I just haven’t been feeling the love from Sony lately. With the addition of these new affordable choices, I am now seriously contemplating staying in the Sony camp. Realistically it’s the photographer and the lens that are the most important part of a good photo. The camera body just provides additional features and tools to improve the process of capturing images. Now the question is APS-C sensor or Full-Frame?
Posted by TW Oliver at 10:20 AM No comments: Links to this post