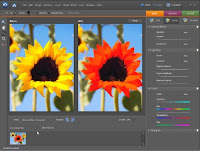 Adobe Systems Inc. has launched Photoshop Elements 6, the updated version of the photo editing software program. The software includes new Photomerge technology, a Quick Selection Tool, and Guided Edit. It will integrate with Premiere Elements 4, Adobe’s video editing software also announced recently. Currently only available for Windows platforms, the Adobe Photoshop Elements 6 and Premiere Elements 4 bundle has a retail price of $149.99, and the stand-alone Elements 6 is priced at $99.99.

According to Adobe, the bundled software can edit both photos and videos. The integrated system uses a shared Organizer with a tabbed interface to sort through images and videos.

Photoshop Elements 6 offers new features like Photomerge technology, which allows users to select faces and body language from different pictures to make a single group photo composite. Other features include a Quick Selection Tool that reduces a task to a single click, and a new Guided Edit mode that aids users in step-by-step editing.

“With access to all photos and video clips from one convenient place and options to export to YouTube, mobile devices and interactive galleries created with Adobe Flash technology, we expect our new products to be high on holiday wish lists,” Loiacono said.

Photoshop Elements 6 is part of the Adobe photo software family, sitting in between the more advanced version of Photoshop CS3 and the anticipated entry-level Photoshop Express online version.